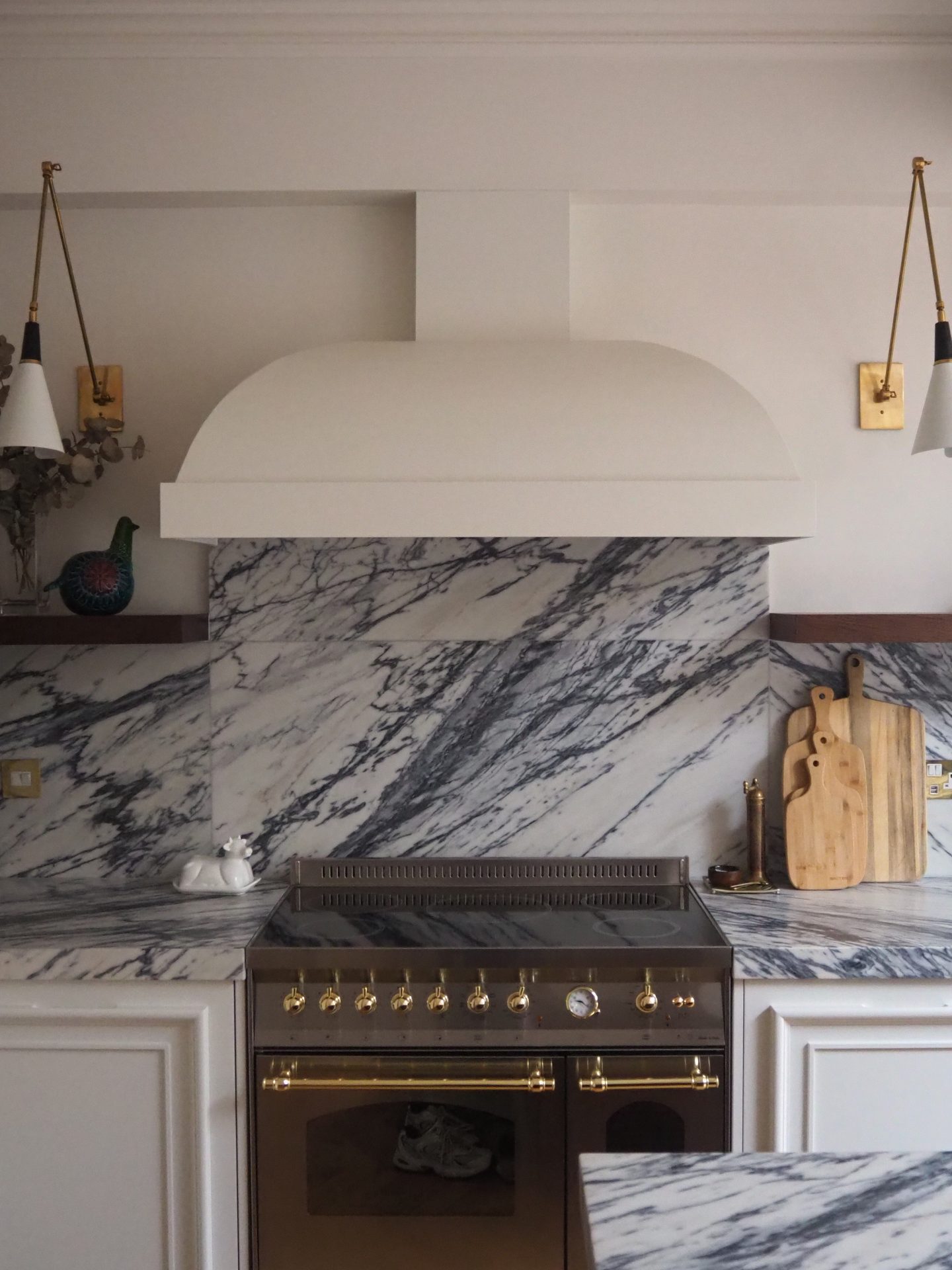 It took years of saving after buying our home to then finally be able to build our new kitchen. And funny as the years pass the original things that bothered you so much about the old house become just part of your life. The broken oven door we would lean up against the safety glass and the dog would knock over in excitement making a huge bang. The sample splodges of paint all over the walls where one weekend I decided enough was enough and I would paint over the mangled ripped blueish kitchen wallpaper with a soft pink – and then never got round to it. The skinny shower at the end of the kitchen we never used but became the perfect place to store those garden cushions and laundry baskets.

Anyway – it was all so worth it when finally this February we moved back into our family home to the kitchen of our dreams – which as dramatic as it sounds – has transformed our family life. Afternoons after school all together, as I cook the dinner, Margot plays and Vivienne sits at the table doing her homework. No more shouting from the galley kitchen, across the hallway of a dining room and into their dark playroom stuffed with all the toys they never played with. We’ve created a clutter free, spacious room we all want to spend time together in. And of course – it looks pretty good too!

Lets start with the big stuff. The kitchen. I have been a huge fan of Blakes designs for years and years now and back in 2019 I went in to meet with the team with a stack of dream kitchen imagery. And they had just created kitchen cabinetry almost identical to the cabinetry I had been drooling over. So it was set. As for the shade of white I had no idea and it took me so long to choose. I knew I wanted white – and I didn’t want it to look bright or ‘new’. I love things to look like they’ve always been there. Have some warmth and history. Strong White by Farrow and Ball ended up being ‘the one’ and once I had made that decision it was that everywhere. Cabinets, walls, ceilings.

I was pretty set on having a vintage island unit and trawled sites for ages to find one. But speaking with the team at Blakes we began to realise it just wasn’t practical storage wise. So keeping with the idea of the island being stand out from the other cabinetry I asked if they could do the same design in a dark wood. So after going away and speaking with their geniuses in the atelier they said yes – sent a sample – and my island was born.

Before I worked in fashion I started my career out of university working in interiors and so would attend trade shows with clients. Ever since I clapped my eyes on the Lacanche range cookers when I was 21 I decided thats what I would have in my ‘grown up’ kitchen. I had moved budget around and convinced myself we could afford one (we couldn’t) but then I realised the wait time for going to be about six months so that was it off the dream list. So when I found a brand I had never heard of before I was so excited to see their beautiful designs in stainless steel and brass and the romantic Italian styling. Long term followers will know I am HUGE fan of Italian food and had many a holiday there with our family mainly Puglia. And five months of using the Lofra range I couldn’t be happier. Its a statement oven with wow factor and cooks beautifully. I also went for an induction hob which was a last minute switch – Richard has always been super keen and me not so much. Now I have turned – I wouldn’t go back. It is just so much easier. And also works well as a quick worktop for things you might not want to put on the marble when prepping food.

The marble – working with Blakes they got to know exactly what I liked and they knew how important it was to have the worktops as a piece of art in my kitchen. I knew it wasn’t the most practical option and I think if you choose marble you have to accept it will age, mark and tarnish over the years. And that will be part of the beauty – the story of your family life in the kitchen. I already have a champagne flute ring from the first weekend when Richard and I celebrated Valentines day. Typically it was me that did it – but I don’t mind – its there as a memory of that first weekend in our kitchen. And you have to look VERY hard to spot it.

The problem we had with the marble was… budget! So Blakes went away and sourced the most beautiful piece that was in my budget and they knew I’d fall in love with. It did mean we had to make changes in some of the design. The shelves became wood rather than the matching marble as you would need to have bought so much more length to create the shelves. But honestly – I am glad. The warmth of the timber sits perfectly with the veins of the marble and ties the island into the other cabinetry perfectly. We also had them made at the exact same thickness as the marble worktops. The near ceiling high fridge freezer and pantry create drama at the end of the kitchen, and the worktops stop short of the other end allowing me to have the dreamy floor flowing curtains I wanted.

The floor. My friend renovated her home in North London a few years before me and I have always loved her floor choice. When she told me it was actually planks rather than chevron making it 1. cheaper to buy and 2. cheaper to install I was sold. It was from Havwoods but when I called them they said it had been discontinued. Then she suddenly remembered there was some in their outlet so that was a great way to save a few pennies. Lesson learnt – always check if companies have an outlet as well. Then I had to make sure that the wood wasn’t too close in colour to the island cabinetry as I wanted the cabinetry to stand out rather than blend.

I found all the sockets and light switches on Instagram and fell in love with the burnt look, and the fact you could have them in the white detail rather than the black that I’ve used in other rooms really sold them to me. They’re from a company called Dowsing & Reynolds and after getting the sockets and switches I saw the bubble light and knew instantly it was perfect for above the dining table.

The dining table and chairs are old now – chairs from Graham and Green and the table is from Pash Living. I decided I wanted to really create areas within the new room, so although its one big room there’s a clear divide in the lounge area, the dining area and the kitchen. And I also wanted to make a thing of the original building and the new part of the building – so I added coving and panelling to the original part.

In terms of lighting I went for white spotlights to hide in the ceiling and the beautiful wall lights from Inscape design – the same lady I had previously bought my lounge light from on Etsy. I popped an old lamp on a tall table in the corner to create a cosy feel around the lounge area and its perfect for evenings with the sun setting through the skylight and a soft lamp in the corner.

The doors I sketched out and had made by a carpenter. I knew I wanted the beautiful detail of the vintage style espangalettes. That was slightly trickier having them open out when most doors with that feature open inwards – ie. on a balcony, but we got there in the end. I then added a warm timber curtain pole stretching across the entire width of the room for a touch of drama. And the super long curtains from West Elm which are black out – perfect for earlier ‘movie nights’ with the girls.

My beautiful sofa I have had about four years now and it still looks pristine despite living in the playroom all that time. The stain-proof velvet is sent from the parenting gods / Love Your Home. Then the TV cabinet I bought on a whim from M&S. I had ordered a metal one before but it kept being delayed four weeks, then another six and another four so ended up cancelling the order and getting a next day delivery. It fits perfectly and complements the gold frame I have had put around my Samsung Frame TV. I asked a local framers if they could do it for me and they were more than happy to. Much cheaper than some I had seen from the US.

I know I am missing things now – the small details – the tap I went for an antique brass rather than a gold as I think they wear better with marks etc. Sink – I went bowl and a half in butler style. So far its been amazing. Shelf styling – minimal. A few pieces I picked up in charity shops for a few pounds, my Anissa Kermiche candle holder I love the curves so much. The chicken egg holder was in my nan’s kitchen for many years. And the latest addition – the colourful chicken. I had always admired at my in laws and so they gifted it to us when we moved in and we have since found out its a rare antique – a Aldo Londi piece, so particularly careful dusting that one!

Please comment below any questions or links you need I am sure I have missed things but feel I have rambled on so much too. Thank you so much for reading – if you’ve got this far well done!