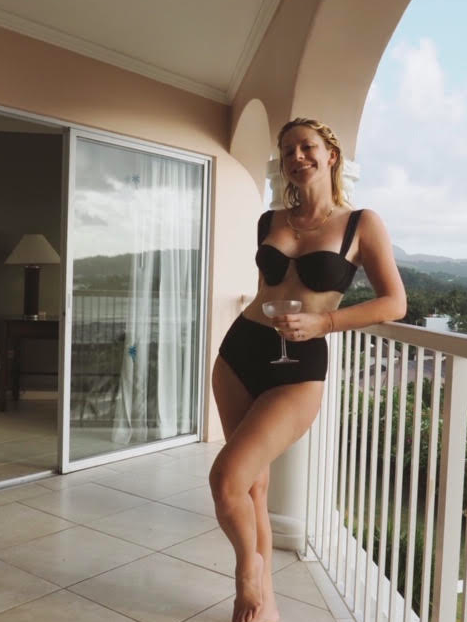 The idea of going away at Christmas has never appealed to me. I revel in the English festivities. The cosy fires. The big Winter knits and park walks followed by mulled wine in the local pub. But with my birthday on January 2nd when everyone is sick to the teeth of celebrating I often get hit by those January blues hard. So this year we decided to head away to celebrate as a family.

I’ve been lucky enough to visit the Caribbean as a child and a teen but never with my husband so we decided on Saint Lucia and the beautiful but extremely child friendly St James Club Morgan Bay www.eliteislandholidays.com  where my parents have stayed before and actually stayed a second time just before Christmas. Flights were booked for the morning of January 1st so we could wake up on my birthday in the sunshine and dip our toes in the Caribbean Sea. I couldn’t imagine a more perfect birthday morning to be honest…

Once all the turkey was eaten, chocolate gorged on and presents opened we traveled home to start packing for the trip. The girls were beyond excited. I was nervous about the long flight… really nervous! My husband as always was positive about it all. New Years Eve was early to bed with the suitcases waiting at the door. An early alarm, taxis to the airport and we had left the tarmac. Eight and a half hours later… paradise. I wont lie – those eight and a half hours were not fun. I did all the prep, broke down the time into activities, had a busy bag, iPad, movies, snacks you name it. But at the end of the day a two year old and five year old are never going to enjoy being confined for that length of time. I will say (spoiler) the flight home was heaven. They slept the entire way. Lesson learnt- book a night flight.

Anyway – once we left the airport and arrived at our hotel everything about the flight was forgotten. The warm sunshine, the smells, the landscape, the people, the sea, the huge hotel bed… just amazing. The same driver that picked us up form the airport ended up driving us on each trip out we took and loved telling us a bit about the history and culture – we were soaking it up.

We spent the first few days at the hotel, getting settled into the time difference and where to go for meals, drinks, pools etc. The first night was one of the best actually – they have a beach party every Wednesday at the hotel so none of the restaurants are open and instead its rows of bbq stations and all sorts of cuisines to choose from. Fire breathers, stilt walkers, dancers, steel band. We thought the girls would be on their last legs but they were absolutely loving every moment of this huge beach party lit up with fairy lights strung from the palm trees on this beautiful beach. My last night as a 35 year old was pretty incredible and we eventually fell into bed around midnight.

The next morning – my birthday – I woke to a stunning rainbow out at sea which added to the magic and then the hotel booked me in a full body Swedish massage after breakfast. Absolute bliss. I didn’t want it to end. Then I floated back down to the pool for the all inclusive sparkling wine which I can confirm is pretty damn good. As are the Margaritas and Pina coladas.

The hotel has six restaurants (we ate at five of them), four pools, six bars and cafes, a kids club, tennis courts, water sports, spa and an adults only area/pool. The kids pool was fantastic, two levels, shallow and deeper areas, two slides, quick easy food and snacks and a very happy team eager to help and make everyone smile. The girls favourite restaurant was without a doubt Treetops – a pizza restaurant that has a help yourself ice cream station with every topping you can imagine. We ate here twice including the evening of my birthday. Other than that the girls mainly lived on smoothies, slushies, pasta and hot dogs. A relaxed diet for a week away doesn’t worry me in the slightest. They’re still talking about ‘the holiday hotdogs’. Richard and I however had a much more varied diet – the food was really very good. Asian night particularly amazing, and the bbq meat with coleslaw… dreamy. Nothing beats those morning pancakes with crispy bacon though. They really know how to do crispy bacon there!

Apart from food which I could happily talk about for hours – we did adventure out a couple of times to get to see a bit more of the island. There was a lot more we wanted to do but with the heat and Margot still having a midday nap we stayed relatively close by to the hotel. Trip one – we decided to explore the local market at Castries. Just a five minute drive we were dropped off in the centre and instantly engulfed in the buzz and excitement of it all. I wanted to come home with so much – I love visiting the market when I’m abroad. A couple of souvenirs later we found a small cafe nestled on the waters edge near the huge cruise ships that were standing grand in the dock. A couple of bottles of Piton (the local beer) later and we decided to take a stroll around to see the ships closer. So impressive and quite daunting. Then we jumped back into the taxi and back to the hotel to cool off in the pool.

Our second trip was a little more calm – actually a slice of tranquil heaven really. We were driven about fifteen minutes from the hotel to Pigeon Island national park. We had to pay a small entry fee and then walked left around the coastline where we found the most idyllic little cafe restaurant. It had handmade double wooden swings to sit and relax in watching the sea. And inside was local artwork, games and books to wile away the time. The girls had ice cream and we both had a very cold glass of wine. I could have soaked up that moment forever. We then grabbed our bags and wandered back to a teeny little beach just below it where you could hire beds but we knew we would be in the sea so just piled them up in a corner and dived in. There were so many fish and quite a few people going on organised snorkling and diving trips. At one point a small boat camouflaged in greenery pulled up selling coconut drinks out of the back to people in the water. We didn’t want to leave but with young children we knew it was time to get back and out of the heat.

A week in Saint Lucia went by in a flash. A dreamy flash. The people we met along the way were so friendly and welcoming. The team at the hotel were incredible, constantly making the girls laugh and playing with them. The girls even got quite the reputation as ‘the dancers’ every night after dinner when they’d take over the dance floor with twirls and twists until we would all fall into bed in our one bedroom sea view room. And what a view it was. Now writing this has made me long to go back… time to start planning the next trip I think…

Trip partly gifted by www.eliteislandholidays.com and the Saint Lucia Tourism board.